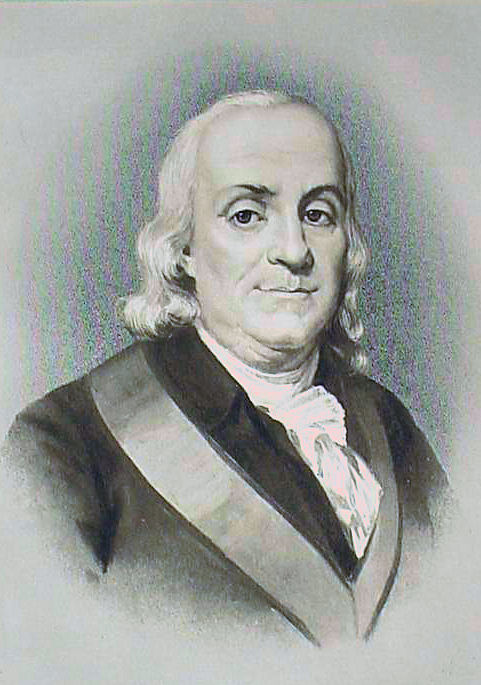 Benjamin Franklin dressed with a Masonic outfit
The possible connection between the American founding fathers, the Rothschild family and the Illuminati would be incomplete without taking into account a key figure: Benjamin Franklin.

Benjamin Franklin was one of the Founding Fathers of the United States of America, author and printer, satirist, political theorist, politician, scientist, inventor, civic activist, statesman, soldier, and diplomat [1]. He was also deeply involved in a variety of secret societies, not only in America, but also in Britain and France. Actually, he was a member of secret societies in the three countries involved in the American Revolution: England, France and the US. He was a member of the Hellfire Club in England, rumoured to be the meeting place for the English Nobility who wished to take part in immoral acts, and where members often got involved in politics. The motto of the club was “Fais ce que tu voudras" (Do what thou wilt); a philosophy later adopted by Aleister Crowley. The Hellfire Club was created and presided by Sir Francis Dashwood; a member of the British Parliament and personal advisor to King George III. [2] British Historian Richard Deacon affirms that the Hellfire club was a centre for English espionage, and claims that Franklin was a covert agent for the British government and for other secret powers based in Europe that worked towards the secret plan of all secret societies. [3]

In 1776, year when the order of the Illuminati was created, Franklin visited King Louis XVI of France to seek funding for the American revolution, [4] while at the same time he was getting involved in the plot for the French revolution to overthrow the French monarchy. This took place inside the Paris lodge “Les Neuf Sœurs" (The Nine Sisters); which was part of the Grand Orient of France -connected to the Illuminati-, of which Franklin was the Venerable Masters. [5] This lodge was casually the exact place were the French revolution took off. While in France, Franklin also initiated Voltaire into Freemasonry, whose writings would later inspire the French Revolution.

However, the best evidence to support the theory of Franklin's involvement in the funding from European hidden interests comes from a quote by Manly P. Hall (author, mystic, and honorary 33rd degree freemason): “Not only were American founders Masons, but they received aid from a secret and august body existing in Europe, which helped them to establish this country for a peculiar and particular purpose known only to the initiated few”. Hall further suggests that Franklin was among those initiated few, [6] but unfortunately he does not specify who was that secret and august body, or who controlled it, or what was the peculiar and particular purpose.

My conclusion on the connection between the Rothschilds and the American Revolution: it did exist through Alexander Hamilton (who could only push the agenda for the first 20 years of independence), and also quite possibly through Solomon and Franklin; though it made no difference at the end. It is true that the American Freemasons shared the same ideology that emerged from Jewish intellectuals in Germany and spread throughout secret societies; but I'm having a hard time relating the founding fathers directly to the Rothschilds, with the exception of Franklin, who obviously had his hands in far too many pies to count as a confirmed agent for any side.


… Next Chapter: Adam Weishaupt and the Bavarian Illuminati