From the Middle Ages to the first Bankers 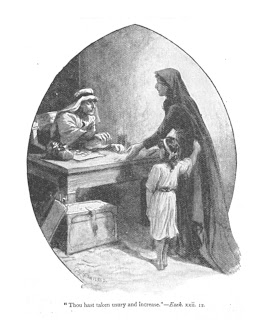 ”In thee have they taken gifts to shed blood;
thou hast taken usury and increase,
and thou hast greedily gained of thy neighbours by extortion,
and hast forgotten me, saith the Lord GOD.” (Ezekiel 22:12)
During the middle ages, there were not many ways for a man to be wealthy without arousing suspicions; apart from feudal rent, which was only accessible to the privileged ones. An alternative was the practice of usury (Lat. "usura": interest, lending money at an interest), however, since usury was considered an increase in capital without any services provided and an exchange in unequal quantities, it was forbidden by all Abrahamic religions (Judaism, Christianity and Islam); [1] and those who practice it were condemned and even prosecuted by the Church and State.

Even though Judaism forbids usury, some Jews interpret this prohibition as a reference to Israelites lending to other Israelites; therefore consider it ethical to lend money at an interest to Gentiles (non-Jews). [1] For these reasons, usury was a common practice amongst some European Jews; partially also due to local prejudices fuelled by a wide range of accusations against the Jewish community (i.e. kidnapping and sacrificing children). This prejudices prevented them from finding other occupations; though many of them managed to work as farmers, manual workers and intellectuals.

The profitability and dangers of usury became evident in an example from XII century Britain, when King Henry II established that all Jewish properties in Britain amounted a quarter of the whole country. However, it’s also worth noting that those properties were far for equally shared amongst the Jewish community; as we can see in the example of Aaron of Lincoln (Jewish financier, and well known usurer), whose debtors, at his death, owed him an amount equivalent to 1/16 of the total Jewish properties in Britain. [2]

During the Renaissance usury was legalised -first in Britain, after King Henry VIII split from the Roman Catholic Church in 1545- though Rome continued to condemn usury until the XIX century. [3] During those times, in Italy, the word “bank” was first used since Roman times in reference to money lending. It derives from the Latin “bancu”, which translates as "desk/bench". This term was common between Florentine Jewish usurers; who made their transactions above a desk covered by a green tablecloth. [4]


... Next chapter: the Jewish Diasporas