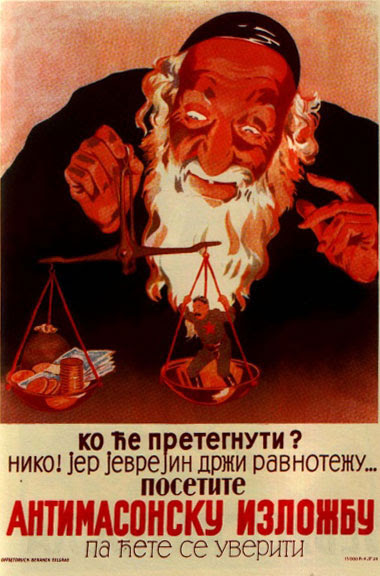 Poster for the 1941 Serbian Anti-Masonic exhibition.
"Who is going to overstretch it?
Nobody, because the Jews balance it."
As we saw in previous chapters, most of those who feared the Judeo-Masonic Conspiracy thought that the Jews where behind it; arguing, in one way or another, that each of them played their part in the plot. The final solution (Ger.: “Die Endlösung”) was the Nazi response to tackle the “Jewish question”; which emerged in Central and Western Europe during the Enlightenment and the French Revolution to the historic unequal civil, legal and national status of the Ashkenazi Jews. [1] However, even though the final solution is commonly associated with the Jews, they were not the only ones prosecuted in reference to this issue, and Germany was not the only country to adopt measures against it.

Adolf Hitler believed that Freemasonry had succumbed to the Jewish plot and that it was an instrument to tear down the racial and civil barriers that stopped the Jews from gaining strong political positions. [2] The Nazis thought that high degree Freemasons were part of the Jewish conspiracy, and in 1933 the German parliament passed the Enabling Act (Ger.: “Ermächtigungsgesetz”), which allowed the disbandment of Freemasonry, the confiscation of the property of all Lodges, and the imprisonment of freemasons in concentration camps –as political prisoners; forced to wear an inverted red triangle. [3] It is believed that between 80,000 and 200,000 freemasons perished under the Nazi regime. [4]

Previous to the Nazi’s raise to power, in Italy, Freemasonry was a refuge and a sanctuary for Jews and Christians who believed in individual and political liberty. This was to change when Benito Mussolini openly became a dictator, and engaged in a campaign against Freemasonry. Mussolini’s Black Shirts were sent to harass, humiliate, beat, and kill Italian freemasons; and to loot and burn their lodges. In 1924, Benito Mussolini decreed that every member of his Fascist Party who was a Mason must abandon either one or the other organization. One year later Freemasonry was dissolved in Italy, under the claim that it was a political organisation. When the freemasons protested in 1925, Mussolini responded: “Masonry must be destroyed and Masons should have no right to citizenship in Italy. To reach this end all means are good, from the club to the gun, from the breaking of windows to the purifying fire... The Masons must be ostracized... Their very life must be made impossible." [5] With regards to the Jews in Italy, and even though there were many anti-Semitic policies, they were far better off than in other countries; in part due to the Italian population's complacent behaviour. [6]

It is claimed that the prosecution of freemasons in Spain began with Primo de Rivera´s dictatorship (from 1923 to 1930). [7] In September 1928, one of the two Grand Lodges in Spain was closed and approximately two-hundred masons, most notably the Grand Master of the Grand Orient, were imprisoned for allegedly plotting against the government. References to a "Judeo-Masonic plot" were a standard component of Franco’s speeches and propaganda. According to Francoists, the Republican Regime, which Franco overthrew, had a strong Masonic presence. [8] In reality Spanish Masons were present in all sectors of politics and the armed forces. [9] Franco produced at least 49 pseudonymous anti-Masonic magazine articles and an anti-Masonic book during his lifetime. According to Franco: "The whole secret of the campaigns unleashed against Spain can be explained in two words: masonry and communism... we have to extirpate these two evils from our land.” [10] During the military coup of 1936, many Freemasons trapped in areas under Nationalist control were arrested and summarily killed. It was reported that Masons were shot, tortured and murdered by organised death squads in every town in Spain. A list was assembled with 80,000 suspected masons, even though there were little more than 5,000 masons in Spain. The slightest suspicion of being a mason was often enough to earn a place in a firing squad. By 16 December 1937, according to the annual Masonic assembly held in Madrid, all masons that had not escaped from the areas under nationalist control had been murdered. [11] After the victory of dictator General Francisco Franco, Freemasonry was officially outlawed in Spain on 2 March 1940. Being a mason was automatically punishable by a minimum jail term of 12 years. Masons of the 18º and above were deemed guilty of ‘Aggravated Circumstances’, and usually faced the death penalty. [10] The suppression of Freemasons in Spain continued for 39 years until the dictator's death in 1975. [12] Even though the Judeo-Masonic conspiracy is associated with anti-Semitism, it is worth noting that Franco did not target the Jewish community in Spain. Furthermore, he favoured the Sephardi Jews during the war. [13]

The Japanese government also believed that the Judeo-Masonic conspiracy was very real, and in 1938, a Japanese representative to the World-Service congress hosted by Ulrich Fleischhauer stated, on behalf of Japan, that "Judeo-Masonry is forcing the Chinese to turn China into a spearhead for an attack on Japan, and thereby forcing Japan to defend herself against this threat. Japan is at war not with China but with Freemasonry, represented by General Chiang Kai-shek, the successor of his master, the Freemason Sun Yat-Sen." [12]

Many other countries also accused and targeted the freemasons in reference to the Judeo-Masonic conspiracy, like: the United Kingdom (1799), Hungary (1919), the Soviet Union and all other communist countries (with the exception of Cuba), and the United States (after the kidnapping and murder of Captain William Morgan in 1826).


... Next chapter: the empires strike back