The death of the Tsars and the birth of Zion 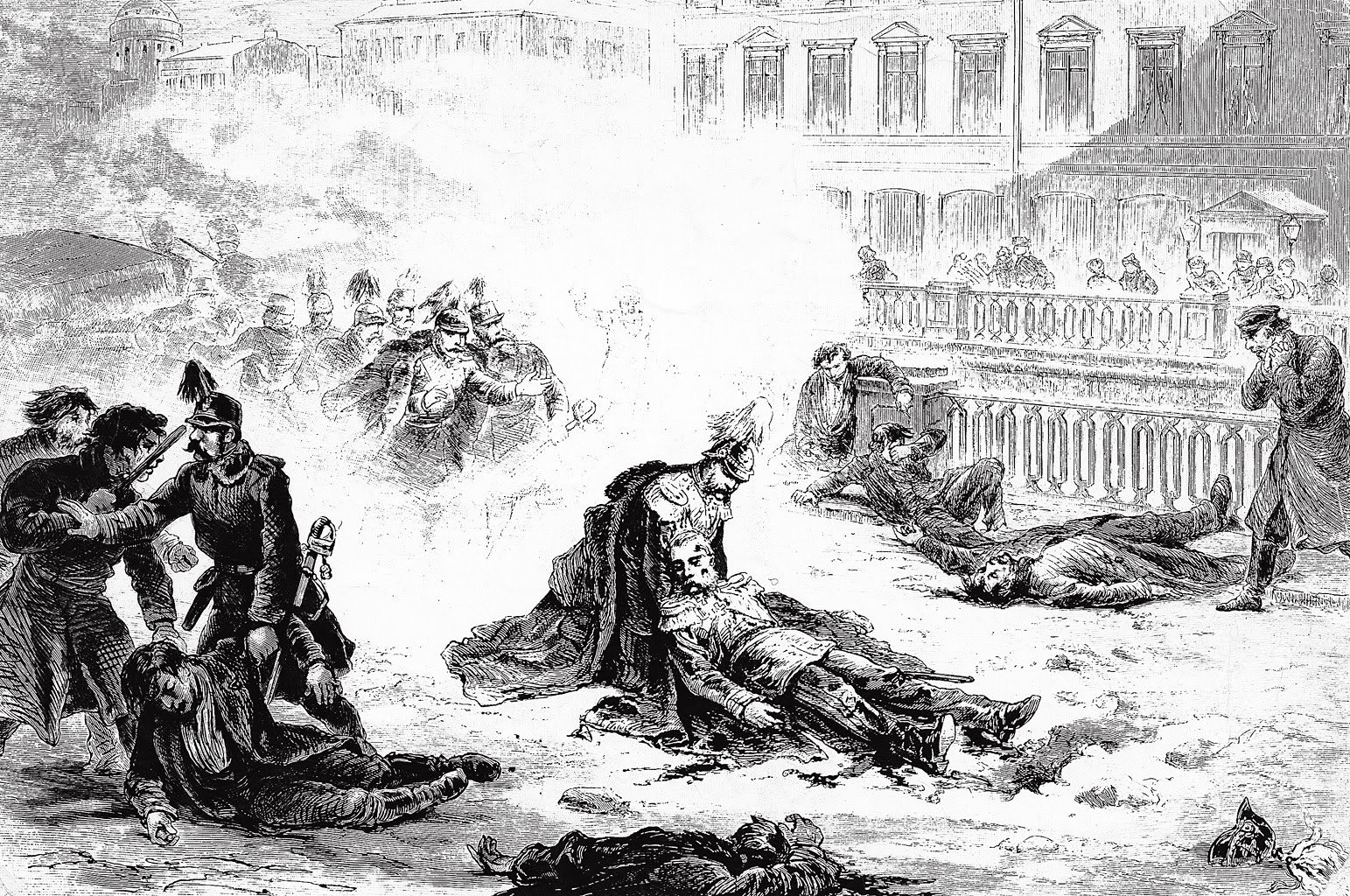 The assassination of Tsar Alexander II
(drawing by G. Broling in 1881)

As we saw earlier, since the times of Alexander II, the Tsars opposed the creation of a central bank by the Rothschilds; as it happened in England (Bank of England) and France (Bank of France), of which the Rothschilds were the major shareholders. [1] From that moment on, the Romanov family would suffer a series of… "accidents".

Alexander II would be the first. After many failed assassination attempts (of which the first came in 1866; just three years after the dispute with the Rothschilds over the American Civil War), in 1881, three men awaited between the crowds for Alexander’s royal carriage from Manezh. The first man threw a bomb at the carriage; which was bulletproof. Alexander was unhurt, but he abandoned the carriage due to the explosion. At that time, the second man threw another bomb at Alexander’s feet. This time he was hit; and he fell on the street bleeding to death, with his legs torn away, his stomach ripped open, and his face mutilated. A third man would be detained minutes after, carrying a third bomb; which was not necessary; Alexander II died that same night. All three detainees belonged to the Narodnaya Volya party, [2] which already carried seven assassination attempts until that date. [3] One of the members of that organisation was a young man by the name of Aleksandr Ulyanov; he was the older brother of Vladimir Ilyich Ulyanov (best known as Lenin), [4] who would later be financed by Jacob Schiff, through Trotsky, not only to start the revolution, but for quite a few years more after it was over. [5]

Alexander III succeeded to the throne that same year, and the Jews were blamed for the assassination; which caused an anti-Semitic wave throughout Russia, to which the new Tsar added stronger anti-Semitic policies. Aleksandr Ulyanov also attempted to assassinate Alexander III, for which he was sentenced to death and hanged in 1887. Alexander III died in 1894 due to kidney failure, which was later linked to the blunt trauma suffered at the Borki train disaster of 1888. [6] And there wouldn’t be anything unusual about Alexander’s death; if it wasn't for the fact that the Borki train disaster consisted in a roof from one of the cars (casually the royal car) falling down exactly over the Tsar and injuring him; while no one else from his family was hurt. None of the three investigations carried out agreed on the direct cause of the crash. [7] Though, it seems that the Rothschilds were the ones that financed the Russian railroad network. [8] Nicholas II succeeded to the throne after Alexander III died.

But there is far more to this story. Alfonse de Rothschild was investing in Russian oil, which in the 1860s was already emerging as the European rival to the American monopoly of Standard Oil (owned by Rockefeller). In the early 1880s the Rothschild family had nearly two hundred refineries at work in Baku, Russia’s oil rich region. Though, by the mid 1880s the Baku-Batum railroad proved to be inadequate to transport the volume of oil produced. Another route was needed, and came in the form of the recently opened Suez Canal. Palestine was suddenly of interest to the Rothschilds as it provided access to the Suez Canal. [9] Benjamin Disraeli (Prime Minister of Britain) turned to the Rothschilds for the cash advance needed to buy shares in the Suez Canal Company. [10]

At the same time, Tsar Nicholas II instituted more anti-Semitic pogroms and discrimination against Jews; and many emigrated. The British Rothschilds were very concerned with this wave of Jewish immigrants into Western Europe and Britain. One potential solution considered to the problem of increased Jewish immigrants in Britain was to institute restrictions on immigration. However, this would likely backlash, in the sense that it would be viewed as comparable to expulsion. So, Edmond Rothschild began his personal campaign to create a Jewish homeland in Palestine in order to create a release valve for Jewish immigrants to put their political action behind a new cause, and to promote them emigrating to Palestine, and out of Western Europe. [9] His proposal for the creation of a Jewish homeland in Palestine served major economic interests of the Rothschilds and of the British Empire, so, Rothschild bought the Suez Canal for the British, which was the primary transport route for Russian oil. Palestine, thus, would be a vital landmass as a protectorate for British and Rothschild imperial-economic interests. In 1895, the Rothschilds, then one of the world’s leading producers and distributors of oil, co-sign an agreement with America’s Standard Oil to divide up world markets. It never took effect, presumably because of the opposition of the Tsar Nicholas II. [8] And we all know what happened to the last Tsar: he was executed with all his family in 1918 by Lenin’s Bolsheviks; funded by the bankers.


... Next chapter: Hitler's Struggle (part I: the Two World Orders)