The World is not enough 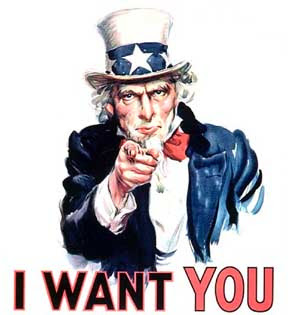 "Uncle Sam": 1917 poster used by the US
to recruit soldiers for both World Wars

As we saw earlier, the bankers were able to obtain vast fortunes through two dubious practices: usury (explained in chapter 1), and fractional reserve banking (by which governments allows bankers the exclusive right to loan money that does not exist, by multiplying their deposits by a number of times [1] [usually 10] –times by which their profits are multiplied-). And they also gained a great deal of power and influence, as well as further wealth, through another dubious type of entity: the privately owned central banks (which give them the exclusive privilege to lend to governments and to other banks money that also does not exist, therefore devaluating our money, and then charge interest on it). [2]

But unparallel wealth and influence over governments was not enough for the bankers; they wanted to own the whole monetary system. So they engineered a new scheme that would virtually strip every person from their legal right to convert currencies back into specie (precious metals), or buy specie with their paper money at a fixed rate: [3] The fiat currencies were about to be adopted worldwide, and the next target was every human being on earth -stripping them of their "wealth" and substituting it with "credit".

By World War I most nations had legalized the central bank’s monopoly on bank notes. But governments still promised to redeem notes in specie on demand. However, with the excuse of the costs of the war governments suspend redemption in specie. [3]

During the First World War, production of gold sovereigns was stopped. The British government suspended the convertibility of Bank of England notes to gold in 1914 to fund military operations during World War I. Although the gold standard was restored in 1924 by Winston Churchill, the gold was at a higher price and coins saw little circulation. In 1920, the silver standard, maintained at a 92.5% purity (sterling silver) since 1552, was reduced to a 50% purity. Furthermore, after WWII, in 1947, the remaining silver coins were replaced with cupro-nickel; [4] which, for the ordinary citizen, meant that for every coin of precious silver he had, he was given an identical one made of worthless metal.

In the US the measures were less subtle, and in 1933 president Roosevelt signed the Executive Order 6102; which allowed the government to confiscate every single piece of gold (with the exception of rare coins) from all US citizens, and prevented them from buying or owning any gold until 1971. The sentence for owning any gold was a $10,000 fine or 10 years imprisonment. [5] The gold of the American people was transported and kept from them in Fort Knox; only accessible to foreign official institutions -allowed to redeem US dollars into Fort Knox's gold- under the Bretton Woods agreement from 1944; after which the IMF and the international monetary system were created.

All participants in WWII abandoned the gold standard to finance the war with the central bank’s generated inflation. During the 1939–1942 period, the UK depleted much of its gold stock in purchases of munitions and weaponry from the U.S. and other nations. Baron John Maynard Keynes (who influenced the Western leading economies) proposed to put the power to print money in the hands of the privately owned Bank of England. But Keynes also warned: "By a continuous process of inflation, governments can confiscate, secretly and unobserved, an important part of the wealth of their citizens. By this method, they not only confiscate, but they confiscate arbitrarily; and while the process impoverishes many, it actually enriches some.” [6]

However, the US Treasury continued to issue money against its silver deposits; and these silver certificates were shredded upon redemption. Congress repealed the legal foundation for Silver Certificates on June 4, 1963; but President John F. Kennedy responded with Executive Order 11110 that the Treasury should continue to "issue silver certificates against any silver bullion, silver, or standard silver dollars in the Treasury". $10 and $20 notes (redeemable in silver) were in the process of being printed when Kennedy was murdered that same year; putting an end to the whole issue.

On August 15 1971, President Nixon announced that the US would no longer redeem currency for gold or any other precious metal, forming the final step in abandoning the gold and silver standards.

But how does all this translates for the ordinary citizen? Well, appart from the fact that we were stripped from our real wealth and were given "credit" instead, and the fact that the privately owned central banks can print new currency -making your money worth less-, which is then lended to commercial banks, who are allowed to multiply it by 10 for the purpose of lending it again -and therefore reducing your money's worth even further-, it means that for every dollar you (or your family) had under the gold standard, you should have 55 of today's dollars. In the same way: for every pound you (or your family) had under the silver standard, you should have 35 of today's pounds. Furthermore, it also means that, as Keynes warned, our governments can take as much wealth from us whenever they please by simply devaluating our currencies.


... Next chapter: The Big Brother