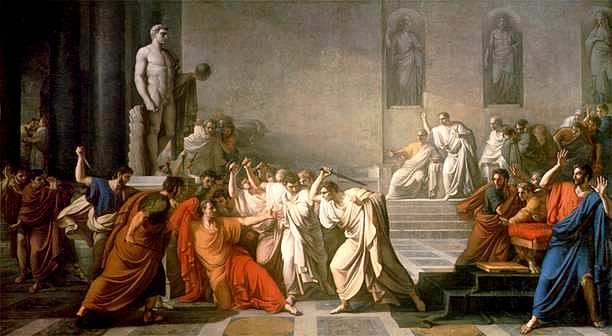 "Morte di Giulio Cesare" by Vicenzo Camuccini
To understand the origins and the background to this conspiracy it's important to have a basic understanding of the social and polical problems that surrounded the most profitable and controversial type of business history has ever seen: usury.

One of the earliest examples in written history of the problems with the usurers comes from the Holy Bible. In the times of Jesus Christ, Jewish people could only pay the Temple taxes with a special coin called the 'half shackle', which was the only coin of half an ounce of pure silver without the image of a pagan emperor, and for that matter was considered the only coin acceptable to God. However, half shackles were not plentiful, and the usurers (also known as 'money changers' in those times) had a monopoly on their supply. This monopoly allowed them to raise its price to whatever the market would bear, making huge profits; since all the Jews that went to Jerusalem had to exchange all other coins for half shackles on their visit to the Temple. To Jesus, this totally violated the sanctity of God’s house, and in an attempt to expel the usurers out of the Temple he charged against them, and said: “It is written, my house shall be called the house of prayer; but ye have made it a den of thieves” (Matthew 21:13). This was the only time Jesus used force during his entire ministry.

But just 200 years before, Rome was also having problems with the usurers; to the point that two emperors had to reform usury laws in an attempt to tackle the problem. Both emperors were assassinated. Julius Cesar also tried to put an end to the usurers' control over the money supply, and in 48 BC he took back the power to mint money from the usurers, and began to mint coins; making money plentiful, and for the benefit of all. The Romans loved Julius Cesar for this decision, as he used this money for great public projects. But the usurers hated him for it, to the point that some historians believe this was an important factor in his assassination. After his death, there was a decrease in the money supply, and usury and debased coin became the rule; followed by an increase in taxes and corruption. The money supply in Rome was reduced by 90%. As a result, common people lost their lands and their homes, and the Roman Empire plunged into the dark ages.

A thousand years later, the Knights Templar invented an ingenious system that allowed pilgrims to travel without cash and valuables in their way to Jerusalem; and therefore, without the risk of being robbed during the journey. The travellers would leave their money and valuable items in the nearest Templar commandery, and in exchange they would receive a note in cipher, which only other Templars could interpret. Every time the traveller needed money along the way, he would simply go the local Templar commandery, get some cash from his account, and the note would be re-cipher. On his return, he would cash the rest of the money on his account in exchange for the note.

But the most controversial service offered by the Templars was money lending (another of the many names for usury). With the money held in their deposit boxes from the pilgrims travelling to the Holy Land they began to lend to emperors, priests, bishops, kings and to whomever else needed a loan. Despite the strict laws against usury in those times the Church looked the other way. Furthermore, the Church granted them a series of unprecedented concessions and privileges, which included: freedom to cross borders, exception from taxes, being under no one’s authority (except the Pope himself), and so on. The most common explanation as to why the Church allowed the Knights Templar to practice usury is believed to be in gratitude for protecting pilgrims and defending the Catholic faith during the crusades. However, many believe it also had to do with other matters; like their silence.

The usurers (also known as the 'goldsmiths' in medieval times) followed the system used by the Templars when their order was disbanded. The goldsmiths also realised that the depositors never came at the same time to withdraw all their savings or cash, and they thought that they could not only lend this money (that really wasn't theirs) but to issue notes similar to the ones used by the Templars promissing a certain amount to the holder; this was the birth of the paper money and of the fractional reserve banking (which consists in lending more money than the one held in deposit by printing promissory notes for wealth that didn't exist).

The services offered by the Knights Templar, and later by the medieval goldsmiths, became the model for the current economic and banking systems: money transfers, credit and checking, safety deposit boxes, pension plans, wills, and above all, money lending, promissory notes (paper money) and fractional reserve banking.


... Next chapter: From the Middle Ages to the first Bankers

Mindworks Media Group Inc for The History Channel, “Decoding the Past: The Templar Code, the crusade for secrecy”, A & E Television Networks, 2005.