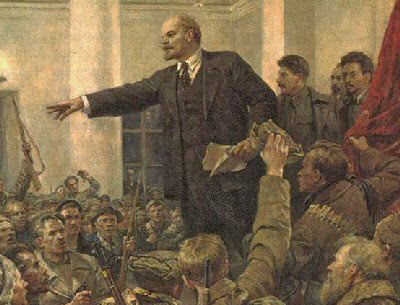 Lenin in the Bolshevist headquarters in October 1917
(Painting by Wladimir Serow)
As with previous chapters, I’m not going to get into details regarding the Russian Revolution; just try to link the banking dynasties with key figures and events that lead to the downfall and execution of Tsar Nicholas II, emperor of all Russias.

In 1863, President Abraham Lincoln discovered that the Tsar of Russia (by then, Alexander II) was also having problems with the Rothschilds; as he was refusing their continual attempts to set up a central bank in Russia. The Tsar then gave President Lincoln some unexpected help: he issued orders that if either England or France actively intervened in the American Civil War, and help the South, Russia would consider such action a declaration of war, and would take the side of President Lincoln. To show that he wasn't messing about, he sent part of his Pacific Fleet to port in San Francisco and another part to New York. [1] Neither England nor France intervened in the American Civil War, but the Rothschilds would not forget about Russia.

But first let’s go to Germany a few years back to look at a key figure from the communist movement. It is well known that Moses Mordechai Marx Levi, best known as Karl Marx (German philosopher, political economist, historian, political theorist, sociologist, communist, and revolutionary), was from a Jewish origin; [2] he was the son of Herschel Mordechai (lawyer and socialist philosopher), who changed his name to Heinrich Marx. But what most people don’t know is that Karl Marx had family ties with the Rothschilds; through his great grandfather (Barent Cohen), who was also the paternal grandfather of Nathan Rothschild’s wife (Hannah Barent-Cohen). [3] In 1845, Karl Marx moved to Brussels, where, with German philosopher, Friedrich Engels, who he met in Paris in 1844 (where they allegedly joined the Grand Orient Lodge [*]), and together reorganized the Communist League. In 1848 Marx and Engels published the Communist Manifesto; commissioned by the Communist League; [4] though it is also believed that most of the ideals contained in it were already circulating around secret societies since the times of Adam Weishaupt. [5] Marx and Engels’ writings would later inspire the leaders of the Russian Revolution, like Leon Trotsky and Vladimir Ilyich Ulyanov (Lenin); both also from Jewish origins. [6][7][+]

However, to understand how the Rothschild family was directly involved in the Russian Revolution, we first need go back again to 18th century Germany. In 1785, Mayer and his family moved to a larger house, at 148 Judengasse; a five story house known as "The Green Shield" which they shared with the Schiff family; [8] a distinguished rabbinical family. In 1866, Jacob Schiff moved to New York. In 1867, he joined the Budge, Schiff & Company, and in 1875 he leaded the Kuhn, Loeb & Co (and married Solomon Loeb’s daughter). He then directed many important corporations, including: the National City Bank of New York, Equitable Life Assurance Society, Wells Fargo & Company, and the Union Pacific Railroad. [9]

Back to Lenin and Trotsky: On 7 December 1895, Lenin was arrested for plotting against Tsar Alexander III and was then imprisoned and later exiled to Eastern Siberia. [10] At exile's end in 1900, Lenin travelled Russia, Munich, Prague, Vienna, Manchester and finally London; where he co-founded the newspaper Iskra ("Spark"). [6] Leon Trotsky was also arrested in 1898 and also sent to exile to Siberia in 1900. In 1902, he escaped from exile and also moved to London, were he wrote for the Iskra newspaper; where he met Lenin. [7] To cut a long story short, Trotsky travelled to New York, where in 1917 he got $20 million dollars from Jacob Schiff. [11] It’s also believed that along with Schiff’s $20 million, he also received money from: Sir George Buchanan, the Warburgs, the Rockefellers, the partners of J.P. Morgan (with at least $1 million), Olaf Aschberg (of the Nye Bank of Stockholm, Sweden), the Rhine Westphalian Syndicate, a financier named Jovotovsky (whose daughter later married Leon Trotsky), William Boyce Thompson (a director of Chase National Bank who contributed $1 million), and Albert H. Wiggin (President of Chase National Bank). [12][-] According to Jacob Schiff’s grandson, and as it is shown in a report on file with the State Department, Jacob Schiff (long time associate of the Rothschilds) not only financed the Communist Revolution in Russia, he also bankrolled the first five year plan for Stalin through his firm, Kuhn Loeb and Co. [13] Schiff spent millions to overthrow the Tsar. He was sending money to Russia long after the true character of the Bolsheviks was known to the world. Schiff raised $10 million, supposedly for Jewish war relief in Russia, but later events revealed it to be a good business investment. [14] Arsene de Goulevitch, an important White Russian General, wrote: "The main purveyors of funds for the revolution, however, were neither the crackpot Russian millionaires nor the armed bandits of Lenin. The 'real' money primarily came from certain British and American circles which for a long time past had lent their support to the Russian revolutionary cause. . . . The important part played by the wealthy American banker Jacob Schiff in the events in Russia, though as yet only partially revealed, is no longer a secret." [15]


… Next Chapter: The Protocols of the Learned Elders of Zion

[-] I couldn’t find a better source for this statement.