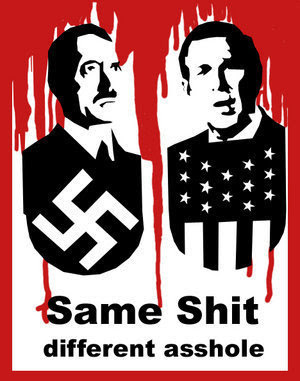 Twenty first century satirical poster
unwittingly showing an apologist for each World Order
The “Main Kampf (eng.: My Struggle)” is one of the most significant political works of all times. It was dictated by Adolph Hitler while in prison as an autobiography, and was published by Eher Verlag –the official publisher of the Nazi party- in two volumes: the first in 1925 and the second in 1926. [1] The importance of the book has nothing to do with whether or not you agree or sympathise with Hitler and the Nazis; but with the fact that it shows the world from the unique perspective of one of the key figures of the 20th century ten years before he even knew he would ever rise to power, and because it sets the basis for what it would later be the Nazi's political agenda. The book is also of great importance to understand the Judeo-Masonic conspiracy, or as it was also known by then "the Judeo-Masonic-Marxist conspiracy", as in it Hitler exposes what he believes is a plot to take over the world; a plot that is corrupting all aspects of German life in front of his own eyes; a plot for a New World Order, that he associated to Judaism, and against which he warned:

“If, with the help of his Marxist creed, the Jew is victorious over the other peoples of the world, his crown will be the funeral wreath of humanity...” [2]

But what exactly did Hitler believe was this New World Order, and why did he associate it with the Jews? To answer this question we need to go back a hundred and fifty years, leave aside Hitler and the Mein Kampf for a moment, and start by explaining what the Old World Order was.

The simplest way to describe the Old World Order is by just saying that it was how the world was ruled until the 18th century; or to be precise, how power was organised before the ideals of the Enlightenment spread throughout the world. The Old World Order was dominated by rival empires that kept an unequal economic, cultural and territorial control over the world through military power. These empires were ruled by and for the benefit of the aristocracy (or an oligarchy); creating enormous social and economic differences, not only between classes, but above all between the different ethnic groups that coexisted inside those empires. In the 18th century these inequalities gave way to a movement that developed simultaneously in France, Great Britain, Germany, the Netherlands, Italy, Spain, the American colonies, and Portugal, known as the Enlightenment, [3] and which was determined to end the Old World Order, either by consent or by force.

1776 is a key date for this New World Order; not because it was the year when the American Colonies formally declared their independence from the British Empire; and also not because it is the year when Adam Weishaupt formed the Order of the Illuminati; but because something else happened in 1776, something that truly influenced a change in the organisation of power around the world, and which would mark the real beginning of a New World Order.

Even though this revolutionary movement developed simultaneously in distant countries, its apologists were well connected through fraternal networks, and are known to have helped each other in areas like economy, politics, philosophy, etc. [4] In fact, the most important figures in each country are known to have met, and even of holding life lasting friendships (as we saw between the American Founding Fathers and the heads of the French Revolution). And actually, the person that would be responsible for the most significant change towards this New World Order was a personal friend to at least two of the most important figures in both the American and the French revolution: Benjamin Franklin (who he first met in Scotland in 1759, and often since in London; where they shared common friends) and Voltaire (who he met in Geneva in 1765). [5] It is believed that Franking travelled to Scotland with the intention of persuading this person to write a treaty on colonial policy; or at least that during that meeting Franklin urged this task upon him. [6] The result was a book published in 1776; a book that would change the world. The book was titled “The Wealth of Nations”, and was written by a Scottish philosopher and economist by the name of Adam Smith. It is suspected that Adam Smith was also a freemason -as most of his acquaintances, and because he shared their ideals and lifestyle- but no evidences can be found of it; all his personal documents were burnt for some reason, and no records exist of him in any lodge from Edinburgh. [4]

But, how can a simple book create a New World Order? Well, it all has to do with the way imperialism was imposed around the world. After the Seven Years’ War, from 1756 to 1763 (also known as the “First World War”, since it involved the whole of Europe, North America and part of Asia), Britain became the dominant empire throughout the world; gaining control over French and Dutch territories in North America and Asia. [7] It was after this war when Adam Smith began to promote his ideas for a new type of imperialism; arguing that it was far too costly to maintain a world colonial empire through military occupation, when those colonies could be given control of their own land while the empire could continue to exploit their richness and be looted just as before. [8] Adam Smith's book was such a success that just one year later, in 1777, the British government was already shaping its policies based on his ideas; using the book as a guide to introduce new duties and taxes, designing commercial treaties, promoting free trade and credit, [9] and shifting from colonial imperialism to capitalist imperialism.

This also meant that this New World Order could not only exploit and control colonies, but through its new economic system (capitalism) could actually exploit any other nation or empire. It also meant that power did not lay anymore on the hands of the aristocracy, but on the hands of those who controlled the economy. But not everyone was happy with this New World Order; especially those at the losing end of the stick…

"A change of a fundamental kind has taken place in the economic structure of Europe whereby the old basis had ceased to be wealth and had become debt. In the old Europe wealth had been measured in lands, crops, herds and minerals; but a new standard had now been introduced, namely, a form of money to which the title 'credit' had been given." (Napoleon Bonaparte) [10]